In recent years, the world graphite industry is characterized by a steadily growing demand and limited supply. In Russia, the volume of graphite production in the last five years has undergone significant changes. According to analysts of «GidMarket», the current production capacity of Russian graphite manufacturers makes it possible to produce nearly three times as much graphite than there is at the moment. «GidMarket» gave an estimate, which showed that during 2012-2016 the two main territories for the receipt of revenue for graphite sales are the Urals FD (Federal District) and the Siberian FD. Only in 2013 did the the Siberian FD manage to become the leader in sales, in other periods Ural FD always took first place. By the end of 2016, the share of the Ural FD was 67% in the structure of the proceeds from graphite sales, for the Siberian FD - only 33%. 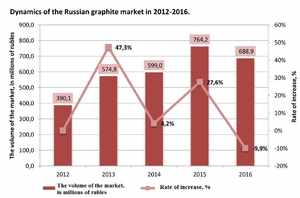 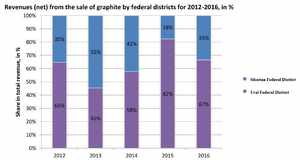